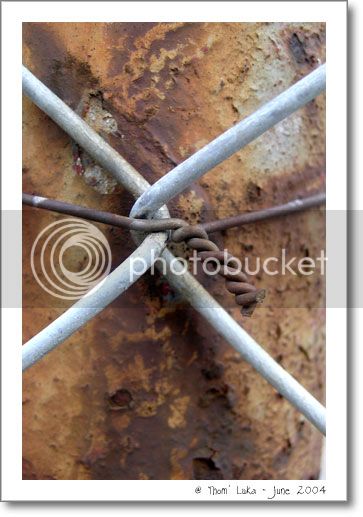 As usual.. there's more pics in my Photo-Journal..

In a sense.. Banners is an ironic name..

I mean.. it's similar to Banning.. but.. the purpose, as it's used, is that you want people to come there.. not ban them..

Now.. I posted my banner for

luka91_photo in my previous post, and (for once) checked the entry to see that it turned out ok etc..

and started to think..

Wonder if someone has read, or tried, the text in the banner??

Well.. the text doesn't mean anything, and is just some, separate, senteces I came up with..

When I started, I had no real idea of what I wanted.. I knew I wanted that image of me and the text "Luka91_Photo - A photo journal".. That's about it..

I created a white backdrop, with a slightly noisy texture to it.. Placed the image of me in it.. and wrote the "Luka91"-text.. Obviously it looked sort of empty..
Then I came up with the idea of having text as a back-drop.. it's a Photo-journal.. where I post images, as well as write about photography.. That way I created a Text-layer, with a lot of text that supposedly would be a sort of description of photography and photographing.. Sort of something that could've been pulled out of the journal.. Even if it's total nonsense..

Having looked at the original Layer in Photoshop, I've at least figured out myself what it says..

"(phot)ography is very simple. A material sensitive to light is exposed to selected
(t)he knowledge involved in taking a photography is more about controlling
(h)ow the optics and time that influences the way the light hits that light sen(sitive)
(th)e creativity in photographing, and opens up for endless variations an ima(ges)
(c)amera is nothing more than a room, with one window. In front of that win(dow)
(?)own to the eye one has for objects. The love and interest one feels for the
(cre)ation of God, even if I might not believe in the creator, and the beauty of"

Then the hard work started.. I separated the image of me in two layers.. one with the shadow and one with me, since I wanted to shadow to sort of be cast against that text. In order to get that effect, I needed to make it transparent so the text was shining through, rather than keep it a dead solid. That way, it gives a slightly 3D-effect to the image.. with me sort of standing out, as if I were in front of a wall with text on it.. (Something I'd love to have in real life.. Would be so cool to have, at least one wall in a room, full of text.. One would be able to have separate texts.. One with a typewriter passage all over the wall.. another one might have a handwritten poem on it.. the third might have either chinese calligraphy or, maybe the most beautiful there is, Persian text on it.. ).

The next problem was the "Luka91_photo" text.. Just having the text, obviously would make it a touch too messy, and take away from the impact of that text.. the most important element of the banner.. I created a backdrop.. Not entirely sure how.. I made a rectangle.. probably white.. with a gray frame around it, and then used, if my memory serves me right, an emboss effect on it or something to sort of create a depth in it.. as if the frame was a little in front of the area. Looking at the original PSD-file, I see that the layer is on the transparent setting of "Darken" with 74% opacity. I sort of wanted it to look, with the emboss-effect, to look more like a cut-out in the paper, but I did save the text.. not sure if I never thought about it, or if I considered it but it looked "weird".

The text of "Luka91_Photo" is lots of tricks, and I'm not sure about them all.. All I know is that it consists of 3 layers, but except for one layer, I'm not sure in what order I created the two others. I wrote the text "luka91_photo" in a sort of lavender colour, and made a drop shadow. I have a copy of that layer, with a different hue of the text, a sort of greyish-green-cyan, which is moved about 2 pixels down and to the right.. I think I made it to darken the dropshadow, as well as give a sort of framing to the text.. I also made a layer with only "luka91_photo", without drop shadow, which is placed between the drop-shadow layers. It's a very dark blue, and moved about a pixel down and to the right.. and I most likely created it to sort of bring out the text a litte more from the backdrop of the shadow etc.. Even if it doesn't really affect the colour of the original layer, looking at the separate layers.. the other drop shadow layer sort of diffuse the text some.. but with the dark blue layer, it makes the text really sharp and it looks way more purple than it does from the beginning..

Then I simply added the text, in white, "A PHOTO JOURNAL".. No frills at all..

Making that banner came at a time when I created two other banners, for myself.. Also made some banners for

frida as suggestions, even if she didn't use them in the end :).

I think it all started with the

photologists banner, since I wanted a banner for that to use as advertising for the community when I posted in other communities etc..

With that one, I had a clear idea of I wanted before I started.. Since it's a community, I used photos of some of those that were members of the community.. me..

jema (with their permission). I scaled them and arranged them in an order I thought created a nice "image". Then I created that rectangular white, with a slight transperancy, area and added a drop shadow to make it stand out from the background. Then I simply used a text from the dictionary, which was where I picked the name from originally. To make the name stand out, I created two additional layers with the texts "Photo" and "logists" (I wanted two colours to point to the fact of "Photo" (it being a photo-community) and "log" (since it's.. well.. sort of a log-book). I placed those, different colour texts above the original text, but 1 pixel up and to the right.

While I was doing this I also needed one for my site, in order to complete the series..

By far, the most complicated of the bunch.. Since I use my "Heart"-image on my site, I thought I was gonna use that.. with the "Thom' Luka" logo.. Simple enough, but far from easy getting.. With lots and lots of transparent layers.. The "Thom' Luka" text alone, takes up 4 layers.. and is actually split in 2.. 2 layers with the logo outside of the "heart"-image. One with the violet text and one with grey text, slightly displaced to create a shadow. Then two layers with the middle of the name, and ironic.. none of them violet :-p. Actually, one is a black square with the text in green (Inverted I think), and then a completely black layer on top of that, using Difference. As for the heart-image. Well.. that's the complicated story. It's introverted, all the way.. First an introverted version at the bottom, with a frame. Then a simple white square that covers the area where the logo is gonna be. Since that layer is "Overlay" it brings up the contrast a lot in that area. Then I have that green Text-layer with the black square. Since that layer is Exclusion, it introverts the same area which is covered by that white rectangle above the image-layer. That way, I actually use only a single, introverted, layer with the actual photograph, but using several other layers with Transperancy effects, get it to look as one introverted area and one "original" area. I guess the working of it was that.. I created the layer with the photograph. Needed to "mark" the area where the logo should be, and marked it with a white rectangle. Then I combined, originally, two layers.. with the same white rectangle and the logo merged into one layer which inverted the photograph behind it.. but since that created a green logo, I added a layer that turned the logo into violet. Since I wanted the logo to be transparent, so the photograph could be visible through it, I simply couldn't just add a violet version of it on top. I probably had to introvert it, and then use Difference to get the transperancy, at the same time as it cancelled out the introversion in the bottom logo-layer..

In the end, I just added the red description-texts on top of it all..

When I'm playing around in Photoshop, it's not as much know how, as much as it's finding solutions to problems.. If I do create Layer A, with that look.. I then need to create Layer B to sort of cancel out the negative effects of doing that with Layer A, to sort of correct the areas which needs to be corrected.. Which in the end might run up to 20 different layers, of which 10 of them are copied layers of some of the other.. For one of the photos I did with

frida I know I made 6 copies of one layer, in order to apply various effects to various parts of the image.

That's what I think most "novices", as if I were any other myself, have a problem with.. Using layers to get the effects they want.

The weather here has been perfect for it..

It's not been that warm lately.. and some raining..

That way, when the "heat" came.. it's exploded in mosquito eggs hatching.. and now.. I've got like.. mosquito bites all over.. :(

at least a dozen of them..